Finding my way through my forties

I’ve mentioned here in the blog about my delivery of vegetables and fruits that I receive weekly from a local farm and how much I’ve enjoyed my bounty which I have dubbed The Harvest Bag (that’s not actually what the farm place calls them, but it sounds like it should be called that, right?) 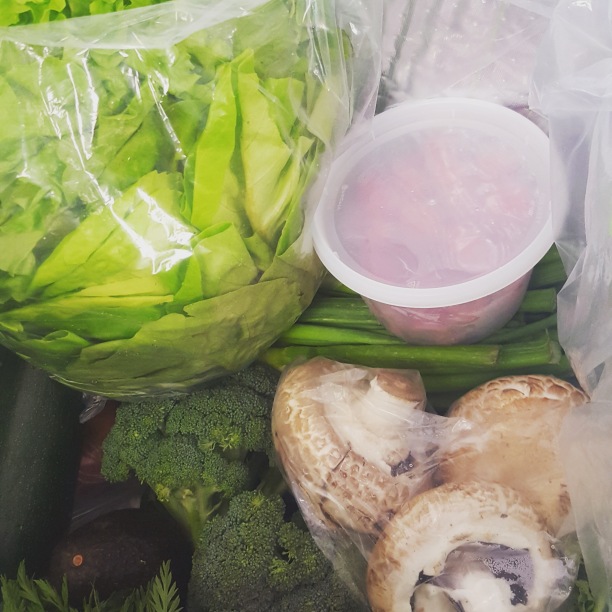 But I have learned something…there is something a bit dark that you’re not told when you order your first delivery…and it’s this: The Harvest Bag is a commitment. The Harvest Bag is a LIFESTYLE. The Harvest Bag requires attention, otherwise its contents will wither and die, not unlike those tiny digital animal keychains from the 90s (Tamagotchi, anyone?). I hate to admit that some of the produce from my first 2 bags ended up in the trash because I just didn’t understand that I needed to take care of things right away (or at least within the first couple of  days). What can I say? I was unschooled in the ways of vegetation and did not know what I did not know.

BUT when I got my bag last Friday, I was prepared with a plan. After work that evening, almost as soon as I walked in the door, I started taking care of business. I washed, I salad-spun, I chopped, I diced, I roasted, I steamed…I did everything humanly possible that I could to ensure that my produce would not go unused this week, and that it would not suffer the same fate as its Sister Bags had in the weeks before. All told, I spent about 3 hours of my Friday night tending to my little Tamagotchi vegetables. Such triumph! Such a dopamine rush! This morning I thanked my Friday Night Self for taking the time to prepare it all  – making my lunch salad was a breeze because the ingredients were already prepped and chopped and ready to go. It also makes throwing a balanced dinner together a snap.

And now that I know what I need to do, I’m confident that it won’t take me as long to prep the next bag’s contents on Friday night. Although it might help if I were to buy a bigger salad spinner.

Still feeling a bit tired today, but better than I have felt the last 4 days. I had gotten out of the habit of taking my iron supplement over the last two months, so I started that again a few days ago. I know it takes a couple of weeks for the iron to start doing its thing, but hopefully I’ll start having more energy soon. I don’t really think that has anything to do with why I was so tired over the weekend, but it can’t hurt to put that habit into practice again.

I found my Fitbit!! Just as I suspected, it was in the couch. I think I remember taking it off the charger, then lying down on the couch for a nap and that must have been when it fell in between the cushions. Reunited, and it feels so good. I also read about a hack for the Fitbit sleep wristband thingie (technical term) for the Fitbit One (which is what I have). My sleep wristband got messed up sometime a couple of years ago – I think it got torn if I remember correctly, so I hadn’t been using the sleep function of the Fitbit, but one day when I was perusing the online forum on Fitbit’s website I read about how you can get a cheap terry cloth wristband (the kind tennis players wear), snip a small hole in the center and wiggle your Fitbit into the wristband. Then you just slip on the wristband and go to sleep. I tried this last night and it worked great! It was comfy, it didn’t move around, and it still recorded my sleeping/restless times throughout the night. I love a good life hack!

On my way home from work every evening, I pass by a liquor store, and as I drove by last night it occurred to me that I would like for my attitude toward sweets to be the same as my attitude toward alcohol: nice to have occasionally, but not something I want, or even think about, every day. I’m not a big drinker. I might have a glass of wine once a month on a weekend, or when we go to a Mexican restaurant my husband and I like to have a margarita…but most days I don’t even want alcohol. I don’t even think about wanting alcohol. Alcohol is something that to me is a fun treat once in a great while. I am curious as to why I can’t think the same way about sweets…I  mean, after all, they’re both sugar, right? (Doesn’t alcohol turn to sugar in the body? Am I right in thinking this?) Anyway, I would really love to cultivate that take-it-or-leave-it attitude that I have toward alcohol and apply it to sweets. I just really have no idea how to get from Point A to Point B with that one.

I think one of my goals for this year is to fall in love with vegetables. I like vegetables. They’re nice to look at and they’re so beneficial…but do I ❤ ❤ ❤LOVE  them? Not so much. I do really enjoy roasted vegetables, but roasting them takes a little time and I typically forget to do that when I’m cooking dinner at night. I really like all the vegetable tian recipes I’ve been seeing on blogs and Pinterest lately…so maybe I just need to make up a big batch of that on the weekend and eat off of that for a few days. Maybe that will be a good first step. Maybe falling in love with vegetables is a bridge to lessening my desire for sweets? Hmmm…  Yes, I think my pursuit of veggies will be a good thing to focus on because really, could there be a bad outcome?? Hard to think of one.

Time to wrap this up because unfortunately, I don’t get paid to blog at work and there is actual work-work to be done today.

Note to self:The next time the hubs offers to go grocery shopping, JUST SAY NO!!! Because today I have nothing to eat.

Whenever the hubs does the grocery shopping, he shops like we are going camping. He buys things like 3 packs of hotdogs (we already had 2 packs in the fridge, and no they aren’t turkey dogs!), a 20 pound bag of potatoes (have 10 pound bag unopened under cabinet), SPAM (excuse me while I hurl), Manwich sloppy joe mix (yuck), and 20 cans of vegetables.

Now, 20 cans of vegetables would be okay if they were different varieties. Apparently the store had a sale – 5 cans for $2.25. Good deal right? WRONG!!! He bought 5 cans of corn, 5 cans of creamed corn, 5 cans of green beans, and 5 cans of peas.

Can I just tell you how bored I am already with this assortment???

I like frozen veggies myself, like the sugar snap pea blend, or the California blend, or the stir-fry blend. Do we have those now? NO!! Because apparently the hubs believes that peas, corn, and green beans are the only 3 vegetables on the planet. Oh, and the only fruit he bought was a small bunch of bananas that didn’t have a hint of green on them which means they are most likely already mushy, and I cannot tolerate mushy bananas!!!

Did I mention I’m a wee bit hormonal right now????
So now I have to go back to the grocery store and buy MY groceries. Yummy things like yogurt, and wheat bread, and fresh fruit and I am really jonesing for some guacamole now that I think about it. And I think that if I don’t get some kind of chocolate- covered -something very soon, there’s going to be trouble!

Do they make chocolate covered Midol?