No, not this kind of pot head!! 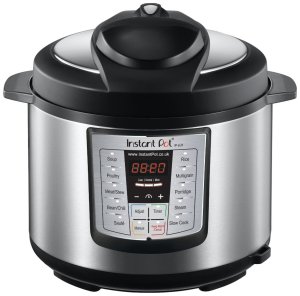 THIS kind of pot head!!

I bought myself an early birthday present last weekend and I’ve been having fun playing with it. I’ve had my eye on an Instant Pot for awhile now what with all the raving I’ve been hearing about it. Cooking a whole chicken in less than an hour? Throwing frozen chicken breasts in and STILL having them ready by dinnertime?? SIGN ME UP.

As the poster child for Staring Into the Fridge and Wondering What to Fix for Dinner, this thing appeals to me on a deep and personal level. It’s like the Powers That Be said, “Oh for Pete’s Sake, will someone invent something for Jill that will cook food really fast so she’ll stop sending anxious vibes into the world every day at 5:00pm?????” Cooking Dinner Anxiety, I haz it.

I got my Instant Pot for $79 at The WalMarts, but realized too late that it didn’t have the yogurt function on it. Oh well, I’ll continue to let Fage make my yogurt for me – they’ll probably do a better job than I will anyway.

The first thing I cooked in it was 6 eggs. There’s a little trivet thing that comes with it and it perfectly holds 6 eggs, so they can be steamed into hard boiled eggs. Steam-boiled eggs. Steamed eggs? Anyway, the came out of the pot cooked to perfection, but also made my kitchen smell like sweaty feet and farts. My kids were thrilled. They gagged and hacked and pretend-vomited for ten minutes after I pulled the lid off (dramatic, much?). But I didn’t care, I had EGGS.

Then my daughter wanted Lil Smokies, so I threw some of them in the IP, but honestly I could have done them in a regular pot on the stove as quick as the IP cooked them. So that was kind of a bust.

Next up was a dozen chicken legs I had bought on sale the week before. I put them (yes, all of them) in the pot and pushed the “meat” setting. I don’t remember exactly how long it was, but they were not done. And then I remembered that I failed to add any liquid before I put in the legs. DUH! Kinda hard for a steamer to work if it can’t make steam. So I added a cup of water and then 40ish minutes later – VOILA! Fall-off-the-bone tender legs. They were so tender that I ended up just shredding the meat into a bowl and making sandwiches with it.

Next up, I plan on steaming a head of cauliflower, cooking some brown rice, then some lentils just to see how they all turn out.

Oh, and I’ve also heard you can make a really good tortilla soup with the Instant Pot too. Probably will do that this weekend.

I really, really like this thing and I’m sure once I figure out the learning curve on it I’ll be using it quite often.

Any other Potheads out there? Care to share any good pressure cooker recipes with me?