The Color Run was a blast!! I ran with a team of friends – our team was called The Psychedelics and our ages were pretty scattered. I ran with my good friend Natasha, her mom (who is probably 10-15 years older than I am), Natasha’s cousin Paige, and a couple named Jake and Trina. Other than Nat’s mom and I, everyone else was in their mid to late 20s (this will be important later on). So you’ve got the older mom-types running with all the “kids”.

Once we finally figured out where we were going and where to park (it’s a miracle I didn’t get a parking ticket) we walked about 6 blocks to the race site. You could hear the music thumping and the drone of people laughing and talking long before we arrived at the park – I think everyone there was in a great mood! Some people dressed in costumes, some in tutus, lots of wild wigs and fake mustaches – there was something to see every where you turned. The only rule for this race is that you must wear a mostly-white shirt. I wore the shirt that came with my packet. 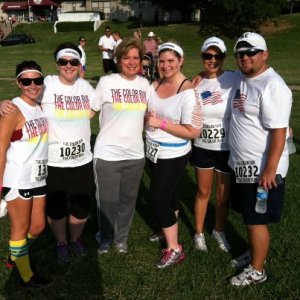 We got in line right at 8am – and then a few minutes later the first wave of runners was let go – here’s how many people were in this race – they let waves of 1000 go about 5 minutes apart!! We finally got let go at just a few minutes before 9am – we waited almost an hour in the chute. It was fun though, chatting and laughing with each other and the other runners.

So we finally start off and because someone has an evil sense of humor, the first quarter mile or so is UP HILL. No easing into it – just grit your teeth and go.  That was really the only hill, it was pretty flat from there on out (thank goodness!). There were so many people there that it was hard to get a good running pace, but we ran for awhile then decided to slow down and walk a bit. Theresa (Nat’s mom) and I kept picking up runs then we would slow down and wait for the others to catch up (we wanted to stay together as a group because it would have been so easy to get lost in a sea of 10,000+ people).  At every 1k there was a Color Station – each station was a different color and most people were walking through the stations because hey, we paid a lot of money to get that color, we wanted to make sure we got our money’s worth!

Not long after the first station Trina was asking “Where’s the halfway point? Are we almost at the halfway point?” Um…no, we just passed the first 1k – we’ve still got a few to go! I turned around at one point and said to the kids “okay gang, let’s run a bit!” and was answered with a resounding “NO!”.  So I looked at Theresa and said, “you wanna run?” And she said “heck yeah let’s do it” so we ran for quite a while then slowed down to let the team catch up. We went through a couple more stations, finally hit the halfway mark and grabbed a drink, then went for the final stretch.

By this time, most of the team was starting to wear down – except for Theresa and I. The “kids” were not looking so good – it was pretty hot and there was only one drink station along the whole course (I’ll gripe about that more in a minute). I still felt really strong and excited, a little tired, but not worn out. We went through the rest of the color stations…

I guess I should explain the color stations a bit better – at each color station there were volunteers who had big bottles (think mustard and ketchup diner condiment bottles, but a little bigger) that were filled with a very fine, dusty colored powder, sort of like cornstarch (which is what I think it actually was). When you run (or walk) by the volunteers squirt your midsection with the powder (they are told NOT to aim for the face). After 5 color stations, you come out looking like a tie-dye experiment gone horribly wrong. It’s great!

Anyway, we went through the rest of the color stations (yellow, orange, pink, green, and blue – so pretty!) and when we had the finish line in sight we started to rip open the color packets that were given to us in our race packet and Natasha and I sprinted for the finish line. As soon as we all crossed the finish line we all had a color fight – throwing color on each other and in the air – it was AWESOME!! Technically, you are supposed to save your color packets for the big Color Festival at the end, but we knew we weren’t going to stay that long. So we just let loose with the color and went wild.

So happy to see this!

Color me colorful (from head to toe)!!

The Good and the Not So Good

It’s a Major Award:  I was really surprised and happy that I was able to not only keep up with, but out-do the 20-somethings on my team! They had admittedly not trained for this, but considering we walked 85% of the way, I expected them to be full of energy and that I would be the one sucking wind by the end. Not so! The two old ladies on the team were the ones leading the way the whole entire race! It was nice to have validation that all those Zumba classes and early morning runs on the treadmill actually did produce results. It also gave me my running mojo back. I was getting bored with running and had been slacking lately, but I think I’m going to pick it up again and keep going.

Major Gripes:  Okay, although The Color Run was two tons of fun, I do have some complaints. 1) Only ONE drink station for the whole course????  The one and only drink station was at the turn around (halfway) point, and they served warm water in tiny cups. No Gatorade, just lukewarm water. Any other 5k I’ve done has at least 2 or 3 drink stations along the course, and considering it was already 90 degrees at 10 in the morning, I thought that was very uncool to not have more/better drink stations.  Gripe #2) After the race there was a big round water trough that had several spouts on it – you had to grab a little cup and wait to get to an available spout to get MORE lukewarm water. I was really looking forward to getting a banana after the race because I was hungry, but nooooo. All they had was some granola bars. That’s it. No bananas or oranges or bagels or anything. Just some dinky, melty, too-sweet granola bars. I ate about half of mine and then started to gag. The rest went into the trash can. Considering the price of the entry fee ($40), I expected a lot more from this race in terms of hydration/refueling. Luckily I made sure to get plenty of water the day before and the morning of the race, otherwise I would have been sorry!

Overall it was a blast and I hope I can do it again next year. If the Color Run comes to a city near you, I highly recommend signing up. It’s not a timed event, so you can take as long as you need (it took us almost exactly an hour, we weren’t in any hurry). And honestly unless you were in the first couple of waves of runners, it’s actually hard to run because there are so many people – my bib number was over 10000 and I signed up a few weeks before they filled up. I’m guessing there were probably ~12000 people doing this race.

It was fun and I’m glad I did it. It boosted my confidence and gave me some much-needed time to be crazy and laugh with friends, and who can’t use a little more of that in their lives?

← Heck Yeah Color Run!!
I hope Yellowstone isn’t closed when we get there. →

One thought on “Race Recap: The Color Run”